During the process of creating my pie for KASC, I had to not only do a lot of test cooking, but I also had to do a ton of close reading. Reading a medieval recipe is a complex and nuanced endeavor. Here is an example of my process of interpreting a recipe.

END_OF_DOCUMENT_TOKEN_TO_BE_REPLACED

I have begun to explore additional research avenues for examining the lives and economic activities of women living in medieval York. One potential resource is the Ebor Cause Papers: these are records of individual cases heard in the ecclesiastical courts at York between 1300 and 1858. These cases represent a cross-section of medieval legal proceedings and can provide some insight into the daily lives of common people. The Cause Papers have been digitized, making them readily accessible to the casual researcher; I chose to use only the most basic records for this preliminary study. Under basic access, one can see the name, role (plaintiff, witness, etc.), and employment of participants in each case, as well as some other notes and details.

END_OF_DOCUMENT_TOKEN_TO_BE_REPLACED

I have to pick my jaw up off the floor.

This is re-published from my old blog.

Here’s a question for you: what’s a primary source for historical cooking? You can’t go to a museum and see (much less eat) the wedding feast of Henry and Matilda. Recreating historical food will always require you to synthesize multiple research strands. That’s the fundamental purpose behind this lesson: all of these types of sources that I describe build on each other, and the strongest research makes use not only of multiple individual sources but multiple strands of research and analysis.

END_OF_DOCUMENT_TOKEN_TO_BE_REPLACED

This is an abbreviated version of a paper I presented at An Tir’s Kingdom Arts and Sciences Championship in March of this year. The full paper is available online: https://medievalyork.files.wordpress.com/2015/03/womenswork1.pdf

Through an examination of archived medieval documents, this paper presents evidence for women in guilds and trades in York during the reigns of Edward I through III. I examined digital transcriptions of primary source documents, primarily the York Register of Freemen, extracting data about female names and occupations. By analyzing these data, I was able to compare my findings to those of other researchers who have written about women as workers in other areas of medieval Europe. Overall, I found that the situation for women in York was consistent with that for women in other medieval European cities: while women did participate (sometimes significantly) in wage-work, women’s participation was typically limited to certain types of jobs in certain industries, and women rarely achieved full guild membership.

END_OF_DOCUMENT_TOKEN_TO_BE_REPLACED

This is an excerpt from a research paper I presented at An Tir’s Kingdom Arts and Sciences Championship in March. The full paper is available in the files section, and includes a full bibliography and works cited; this post has been edited from the introduction to that paper and provides a broad overview of women’s roles in medieval English town economies. The original introduction had a large number of footnotes, because I love footnotes, which I have awkwardly inserted as parentheticals.

The purpose of this research was to uncover evidence for women’s participation in trades, paid work, and commercial/craft guilds (as opposed to parish guilds) in York, England during the reigns of Edward I, Edward II, and Edward III, which covered the years 1272-1377. This was a transitional period in Europe, corresponding with a rise in urbanization and the subsequent boom of the guild movement. In England in particular this was a period of tremendous social upheaval; from the relative stability of the thirteenth century, the early fourteenth century brought a series of famines that significantly weakened both systems and people, and the devastation of the Black Death left chaos in its wake. Yet guilds persisted in spite of significant social upheaval, a phenomenon which has been relatively well-studied. In post-plague England, wages for skilled workers increased, and in general there was an increase in the percentage of the working population involved in trades rather than agriculture. (See Penn and Dyer, “Wages and Earnings in Late Medieval England: Evidence from the Enforcement of the Labour Laws” for more analysis of general post-plague patterns.)

END_OF_DOCUMENT_TOKEN_TO_BE_REPLACED

Pigments available to the medieval/renaissance illuminator included mineral and organic ones. The typical palette consisted of:

END_OF_DOCUMENT_TOKEN_TO_BE_REPLACED

These are some of the books and other sources that I consulted for my scribal project for Kingdom Arts and Sciences, and that I recommended as part of the classes I taught recently. Take a look, hopefully you’ll find something helpful. I have put my top picks in bold:

END_OF_DOCUMENT_TOKEN_TO_BE_REPLACED

This is a broad overview of major styles in manuscript production in Western Europe. It is NOT a comprehensive list of every type of book art practiced in our time period, although I would love to put that together someday 🙂 This is intended as a guide for scribes, especially charter painters, to begin to recognize distinct styles and make their artwork fit more closely within a target style.

END_OF_DOCUMENT_TOKEN_TO_BE_REPLACED 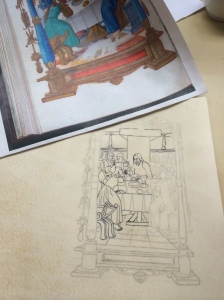